Surface plasmon resonance is an actual topic of modern scientific research. Based on this phenomenon, various sensors and measuring systems that can be used in physical, chemical and biological research, including immunoassay complexes, are being developed. Plasmon resonance in optical fibers is of particular interest. Considering such advantages of fiber-optic sensors as portability, compactness, and compatibility with microfluidic systems, there are prospects of creating high-sensitive fiber plasmon sensors.

To excite surface plasmon polaritons on a fiber surface, a special technique is used to reproduce an analog of the well-known Kretschman scheme in an optical fiber. According to this approach, the energy of optical radiation propagating through the fiber is used to generate plasmons on the cylindrical surface of the fiber. The main structural element in our case is a tilted fiber Bragg grating (TFBG) inscribed in the core of a single-mode optical fiber. Optical radiation guided through the fiber interacts with the grating; as a result, part of the energy is coupled into the cladding, thus generating a series of cladding modes at different wavelengths.

The cylindrical surface of the fiber in the region of the grating is covered with a thin layer of gold, which serves as a source of free electrons necessary for the generation of plasmon polaritons. Plasmon resonance, i.e. effective transfer of the energy of optical radiation into plasmon energy occurs when the projection of the wave vector of the exciting radiation coincides with the plasmon wave vector. It should be noted that the properties of surface plasmons depend on the dielectric constant of the medium, which can be observed in the transmission spectrum of the tilted Bragg grating. Thus, based on such a fiber structure, high sensitive refractive index sensors can be created. Such sensors are of great interest for biosensorics, where they can be used to determine small concentrations of biomolecules in biological solutions, for the purposes of immunoassay.

A number of key results were achieved in our laboratory by the “Nanoplasmonics” workgroup. A novel mathematical algorithm was developed and its software implementation was created to calculate the position of the plasmon resonance on the spectrum. The algorithm automatically determines changes in the refractive index of the investigated substances in real time. In addition the problem of light polarization influence on the stability of the spectral pattern was solved, which opens up prospects of fiber plasmon sensors being applied in real operating conditions. Moreover, a number of important steps were taken within the scope of “lab on chip” concept. As a result, a microfluidic cell model with an integrated fiber plasmon sensor was developed. The cell makes it possible to measure the refractive index in a fluid stream, which is of particular value when working with biological solutions. Furthermore, the chip allows operations with microvolumes of samples about 2 μl. The aforementioned results made it possible to obtain a record resolution for this type of sensor – about 3 x 10-6 refractive index units, which exceeds the previously known results by at least an order of magnitude. 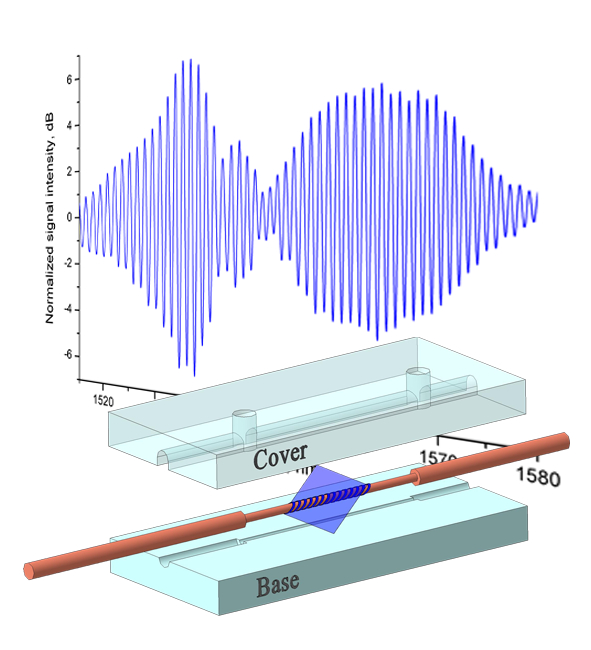