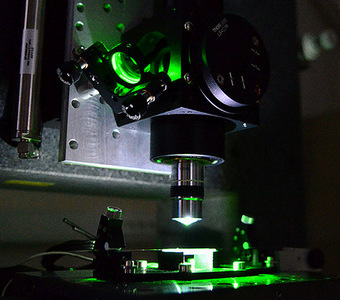 Nowadays fiber optics is not limited to telecommunication applications. Based on fiber-optic technologies, fiber sensorics and laser physics are also actively developing. A significant impetus to the development of these technologies was given in 1978 with the discovery of photosensitivity of optical fibers. It became possible to create internal periodic structures called Bragg gratings, referring to the Bragg-Wulf effect. Generally, inscription of Bragg gratings is performed by forming an interference pattern of an ultraviolet laser beam in a fiber core using specially designed interferometer setups or phase masks. The inscribed grating retains its parameters even after removing of the radiation exposure.

Bragg gratings are widely used as narrow-band optical filters. Their applications involve mirrors for fiber lasers, selection of optical channels and even sensors for measuring different physical values. An external influence on a fiber, such as longitudinal mechanical stress or heating, leads to changes in the optical properties of the grating, thus changing the Bragg wavelength.

In the scope of this field, inscription features and decay mechanisms of Bragg gratings inscribed under various conditions in fibers with different doping are investigated. New fiber sensors, resonators for fiber lasers, including distributed feedback fiber lasers , are being developed. The laboratory has a wide range of technological equipment and instrumentation for inscription and investigation of various Bragg gratings, including gratings inscribed in non-photosensitive fibers with a pure silica core. Among the available equipment special mention should be made of the setup for Bragg gratings inscription based on a 193-nm ArF excimer laser and an all-purpose experimental complex based on a femtosecond fiber laser with operating wavelengths of 1035 and 517.5 nm.

In our laboratory, both fundamental and applied studies are carried out for new photosensitive materials for fiber optics and properties of Bragg gratings in various operating conditions. Research is being carried out regarding the behavior of fiber structures exposed to high temperatures. We are also investigating possibilities of introducing Bragg sensors to the oil and gas industry – one of the actively developing fields. Monitoring technological parameters of oil and gas production and refining processes as well as creating automated intelligent systems are inconceivable without modern optical sensors. Based on the Bragg gratings, point and quasi-distributed systems for monitoring temperature, deformation, pressure, acoustic and seismic sensors are being developed.

Particular attention is paid to the resistance of fibers and Bragg gratings to the effects of ionizing radiation. The radiation resistance of fibers and optical elements based on them is extremely important for industries such as aerospace industry, nuclear industry, and military tasks. Following the research, new sensor designs are being developed. For instance, in cooperation with our partners Prolog LLC we have developed a new high-precision radiation-resistant bending sensor based on a four-core silica rod-fiber, in which Bragg gratings were inscribed. The new design has found application as a bend sensor for technological channels in the graphite masonry of the RBMK-1000 nuclear reactor.